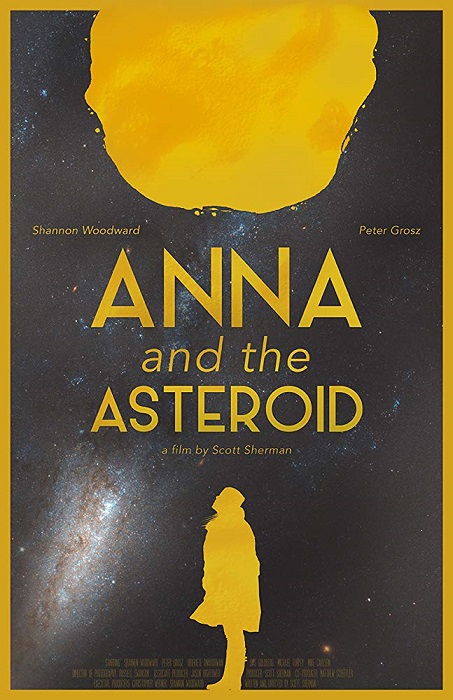 Note: New “episodes” of (Weird) Watching now include more informative links and trailers. You would think I’d have started out with those things! Older “episodes” will be updated in coming weeks when there’s room around other projects. I will also start providing

Long-distance relationships can be tough, especially in the age of Skype and Face Time communication where you can each other from hundreds or thousands of miles away and still rarely, if ever, finally meet face to face. So what do you do if you’ve only seen the woman you love twice, she doesn’t know that you exist, you’re millions of miles away, and you’re an asteroid?

Yes. I tried for quite some time to write that introduction in a clever and artfully worded way but get real: the whole shtick is right there in the title, never mind the trailer. “Hi. I’m an asteroid. This is the girl of my orbits. Isn’t existence cruel?” Tip: if you’ve been stuck on writing an introduction for more than a month, you probably don’t need one.

So let’s get to know this space rock a little better. The asteroid (Voiced by Peter Grosz from The Colbert Report and The President Show) always addresses the viewer and refers to himself in the first-person with “I” but to make things easier I’m going to call him Roy. Roy’s current trajectory has him on an impact course with Earth, specifically New York City, and his introduction as a mirror to your typical jaded city dweller couldn’t be more spot-on:

Believe me, I ask that question more than anybody. I don’t have much else to do up here. Traveling through the infinitude of the cosmos is nothing if not dull. I’ve heard people on satellites talking about the “majesty of space” but when you spend eternity carving through it, it all starts to look the same. Blackness punctuated by a few bright objects. It’s a sloppy polka-dot pattern that would get a wallpaper designer fired.”

The wonders of space that captivate us are just so many billboards to Roy. The only thing he’s come to care about in this wide universe is Anna (Shannon Woodward from Raising Hope and Westworld), who, due to the fact that he only passes by the planet every sixteen years, he’s only met twice and by “met” I mean passed by far overhead at hundreds or thousands of kilometers per second. Still, Roy was captivated and as he reasons, “There are billions of people. It stands to reason that I’d fall for one of you.” Fall is the literal term in this case because Roy is on his way to be with Anna, even if their being together means the immediate destruction of him, her, and the entire planet.

Roy will interject on this matter several times, stating that what’s about to happen should actually be thought of as an act of mercy on his part. After all, we exist thanks to countless flukes on a cosmic scale and there are just as many thing out there that could wipe us out for no reason whatsoever. Everything, everywhere, will eventually end in spite of any lengths we go to postpone it and it will all be without motive. So why not have our be for something? For love? Besides, he’s, “four miles wide and very determined” so what could we do to prevent the unpreventable?

Anna sits in her apartment eating cookies while news of the coming impact and evacuations plays on the TV. Her boyfriend Ben comes home because they let everyone off work early, a lukewarm benefit to impending apocalypse but take it if you can get it. Obviously concerned, he asks her how she’s doing. “I’m just not feeling it,” probably wasn’t on his list of expected replies. The awkward amount of time she takes to clean chocolate from her fingers so that he can put on the ring he picked up for her on the way home and the fact that she promptly goes back to looking over his shoulder at a cookie advertisement certainly doesn’t improve things so Ben just leaves.

Anna then goes to her sister Patricia’s apartment but won’t be joining in the evacuation to their parents’ house, she’s just here to see her and her nephew one more time and let Pat know that she isn’t coming. Patricia flips out and says that she’s crazy but Anna counters with the fact that evacuation would be equally so. The way she sees it, no place is safe. This asteroid impact is coming and it won’t matter where she is when it does. What she does care about is if she can take that bag of cookies sitting in her sister’s open suitcase. Hey, if I knew for certain that everything was about to end in a giant fireball I’d be filling up on chocolate creme doughnuts.

With nothing else to do with her time Anna wanders around NYC and as she does a peculiar pattern begins to hound her relentlessly. Wherever she goes, the phone alerts from NASA’s tracking system recalculate the asteroid’s point of impact to her current location. People flee all around her and all she wants to do is enjoy some damn pizza. Finally she just gives up and goes home. She heads to the bathroom and no sooner does she sit down when an agent from the government pops out from behind her shower curtain. The agent informs Anna that his colleagues have been monitoring the shifting impact zones around the city and have observed her at each one, leading them to conclude that the approaching asteroid (Roy) is zeroing in on her, an idea that she readily agrees with. What she doesn’t agree with is the plan they’ve come up with to put her on a boat somewhere in the Atlantic Ocean so that when Roy does eventually hit the planet only parts of the Atlantic seaboard and islands will be taken out, allowing most of life on Earth to survive, expressing a simple, “No.”

“Why?” asks the shocked G-Man. What follows is an excellent monologue that breaks down Anna’s fatalistic views on the world bit by bit. Birth, childhood, parents, expectations, love, sex, dreams, aspirations, defeats, experiences, struggles, happiness, fear, death, nothing is left out and by the end she sums all of it up a simple statement so deeply true and disturbing that it turns the G-Man into a wilted husk. He sees that there’s nothing he can say or do to convince her to come to Washington with him and beats a hasty retreat, but not before scribbling down the coordinates to the proposed oceanic location on a piece of paper and handing it over to her. Anna then heads back out into the near-empty city to do… whatever. So is this really how everything ends, or will something else have an impact on Anna before Roy does?

Favored Ability: CHA. You’ll probably never meet an asteroid as easy to relate to as this one. Even if you can’t bring yourself to sympathize with a giant space rock that’s coming to wipe us all out in the name of love, you will at least empathize with how it feels. I know that’s really strange but it’s a good thing.

I don’t know what to write here and this entry is ninety-nine percent done. This won’t do so just as with the introduction, I’m cutting the conclusion. I enjoyed Anna and the Asteroid both for its dark humor and character writing.

Seed&Spark is a streaming service and platform that independent and aspiring filmmakers can use to raise funds for their projects and make the finished films available to viewers around the world. Subscribers have access to subjects and ideas that you’d normally have to go to a film festival, from the philosophical and strange to outsider and downright weird. I’ve talked before about Greatland, one of the more unusual and intriguing films that have landed on my radar lately. Since that time, the film has been green-lit for post-production and sound editing and will soon be available for your eyeballs.

Signing up for an account is easy and you can even choose your own custom monthly fee or select from several suggested increments which won’t even cost you ten bucks and you can cancel at any time. This all goes towards the platform and creators and since you can view all proposed projects and directly support the films that you want to see get the green light, it comes right around and back to you. Nobody asked me to include this, I have truly enjoyed the content and people I’ve been introduced to since joining and if you’re looking for original, thought-provoking cinema then I think you will, too.