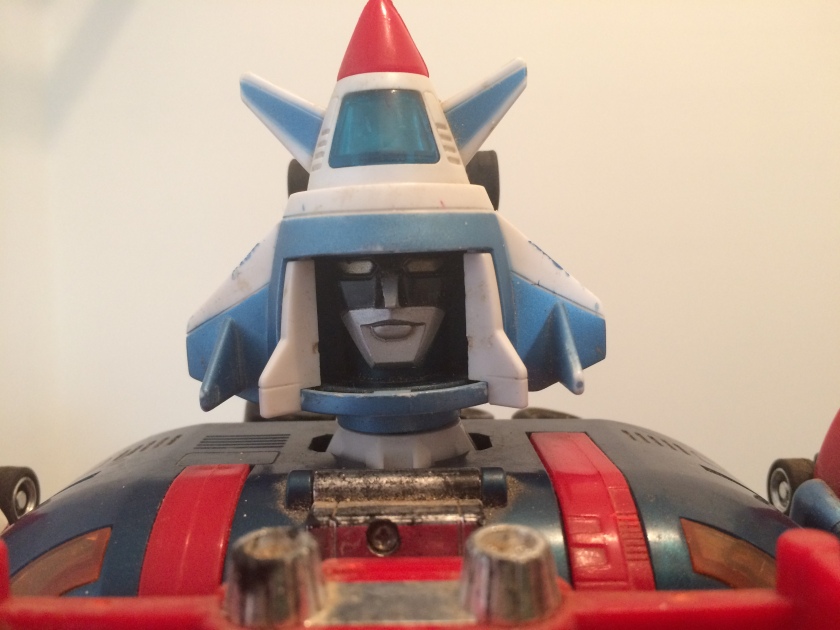 I’ve decided to drop the numbers from the Lame and Cool Toy posts as there have been a lack of both for quite some time now. I’m not in a position where I can just go out and find something stupid for the hell of it since the closest Five Below and Target are in the next large town over and I don’t feel inclined to pay more for shoddy things at Wal-Mart.

Most of what I am getting in right now is through donations from cleared out storage units. The current golden item is a box filled with old Voltron sets, among them an original run of the toy and a complete robot which I first took to be from another series that was made out of a collection of vehicles. The internet being the super tool that it is, I quickly learned that this was also in fact a Voltron, specifically a “Voltron 1 Deluxe” which only confused me more.

A little more digging imparted unto me knowledge that I don’t blame four-year-old me for missing out on completely. The original Voltron cartoon had two distinct arcs. The first, known as the “Lion Force”, is the one which I was familiar with. After “Lion Force” concluded the show continued on with “Vehicle Force” and followed humanity’s expansion into the stars.

The figure needs a lot of cleaning and one of the fists won’t stay in its launcher but I’m in no rush, at least not any more I’m not. You see, after cleaning all of the dust from the robot I set about figuring out how to disassemble it into the separate vehicles. The legs were simple enough once I knew what needed to be pulled on and what needed to be pushed or slid in which direction. The arms were also a rough breeze and connecting the head with “Big Red Button” was trivial.

It was when I came to the last three sections that made up the torso where things turned sour. Every contact on the figure could be figured out without the instructions as long as I gently teased them in different directions or worked with all the contact tabs and buttons that studded the entire figure. These three sections had none of that. The bottom component has a release of some kind that did nothing as I couldn’t ‘t get it to move and I’d already tried every other release button and knob on the top piece so I think, “Maybe I’m just supposed to pull it.”

I was not supposed to just pull it.

There was a lot of resistance as the part slowly inched out followed by a loud noise as I was showered by bits of blue plastic. Inside the top piece were two tabs holding the middle section in place and it was by some divine miracle that those weren’t what gave out. The thruster on the left side of the middle vehicle now sported some minor but madness-inducing jagged edges. I still have not found any way to release those inner tabs so I left the bottom section in place and boxed the whole robot before storming off to be mad at another inanimate object and my own self-defeating Monkey Brain.

Good news followed the next day after I had calmed down and looked into repairing broken plastic toys. The damage is such that some epoxy and a bit of paint might take care of it and in the meantime the whole figure still holds together just fine with the exception being that the torso pulls apart much easier; there is a third tab that provides enough friction to keep the vehicle in place. So while I look into fix-its and forums and scope out the local comic shops for any advice, or even someone who does repairs, Vehicle Voltron sits up on a shelf in my studio under Display-Only status.

This is a grand display of 1980’s chunky robot craziness in all of its gaudy glory. The feet are just two van/SUV things supporting a stack of train cars and engines held together by a pair of rocket cars while the arms are plain helicopters with giant fist-cars bolted onto them, while the chest-piece is a solid chunk of plastic that doesn’t turn into any and the head is its own insane little space jet! It’s a big heap of Japanese “take these things and make it work” and it just does.

When I have the guy fixed up and figured out 100% I’ll do a more in-depth look into the individual vehicles as well as the three vehicle combine modes but for now I’ve learned a lesson in not rushing in when it comes to cleaning up and figuring out a retro toy of which you know nothing about.

Fiction in My Head