Once again it’s about 1am and I’m awake. The entire first floor of the house needs a sweep and mop but there are boxes all over the place, we need to go out and get that damn tubing so the dryer can finally be used (I haven’t been able to wash anything since we started moving. I made sure all my stuff was washed beforehand but I’ve spent a month on the same sheets and even my collection of shirts is showing far too many wrinkles. If I could drive and manhandle the dryer myself this would never have been an issue.), I’ve eaten way too much high-fat food over the last two days without thinking about my lacking a gallbladder so each burp is now tinged with the threatening taste of bile, and I fell asleep with a cat for several hours. Important things plus a long evening nap, hence awake. 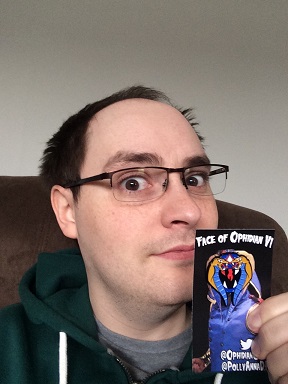 What happened today? Well, the Ophidian pin I ordered arrived today/yesterday. That means nothing to you. More about B-Movie TV: on Fridays they run a wrestling program called Fully Gimmicked Fight Club that showcases independent wrestlers and matches. Fully Gimmicked runs a merchandise and support site where you can grab merch from your favorite wrestlers. My favorite fighter is Ophidian both because his attitude is amusing as hell and due to the flaring cobra mask that completely covers his face and the fact that he covers himself in frigging LED lights as part of his hypnosis gimmick, so naturally I check out the store fairly often to see if there’s anything related to him on offer. Just recently some enamel pins came up on offer so I grabbed one up; the only other way to get one is from Ophidian himself at one of his matches, and since I’m not that far South I’ll take some waiting. If I ever do meet Ophidian I’ll probably just babble like an idiot because that’s what we all do in public event situations.

My brother brought home a big, long box from work, the kind that those posters in the windows of clothing stores come in. He tossed a toy and some catnip in there and the cats went absolutely nuts. My fat cat spinning in a frantic horizontal fashion while smacking the box around is probably the funniest thing I’ve seen all week, unless you account for the Ugandan Chungus he showed me the other day which I just couldn’t stop wheeze-laughing at for some reason.

What else? The current movie review and that short horror story are still taking their sweet time trickling through my brain so I’m going to start filming the new Cool Builds feature. I want to make a custom Title and Thumbnail for this, no more goofing off with the Open Shot templates. The first batch will be small items so that they don’t take up much time, regardless of the fact that I’ll be storing them on YouTube. I don’t want to muck around for longer than I need to like I have been lately, bogs everything down.

That’s cleared my mind a bit, off to try to get some sleep.