There was a knock at the door.
He stared at it for a moment in blank surprise before he put down his drink and got out of the chair. The evening was so quiet that a car couldn’t possibly have approached without him having heard it, and surely no one would have walked here.
The knock repeated, louder.
Luke went to the door and opened it, looking out into the bright moonlight. At first he saw no one; then he looked downward.
“Oh, no,” he said.
It was a little green man, about two and a half feet tall.
“Hi, Mack,” he said. “Is this Earth?” 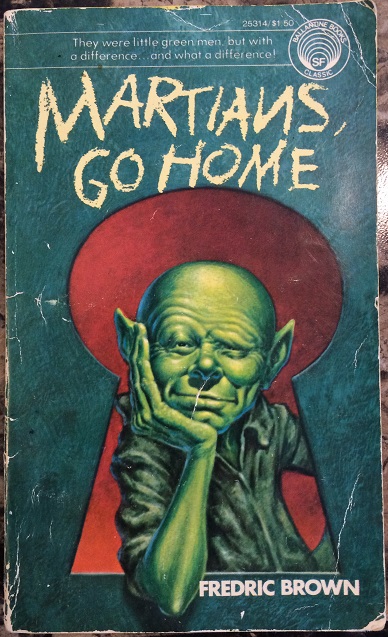 So begins the living Hell of Luke Devereaux. It’s hard enough for a struggling author to keep one’s thoughts in order at the best of times, and having an alien appear at your secluded shack certainly doesn’t help matters. But if Luke thinks he can find solitude elsewhere, he is sorely mistaken.

For Earth, you see, has just been invaded by a force of no less than one million Martians! But unlike any invasion force previously dreamed up by Mankind, these Martians come armed with the most devastating weapon imaginable. It’s no Death Ray or mere Laser Gun, not an army of gargantuan tripods or flying saucers. No.

They are really, really obnoxious.

These Martians, you see, are the most rude, belittling, provocative, loud, and blabbering bunch of extraterrestrials that you’ll ever encounter. They get around by “kwimming” (The Martian Luke first meets explains it as a mental form of teleportation, since our puny Earth brains would never understand more than that.) and their favorite way to use it involves either suddenly appearing seated on the hood or dashboard of moving cars and causing the driver to lose control, or popping in and making loud noises in your ear at inopportune times.

They’re also strangely incorporeal and are unable to interact with humans or objects. This doesn’t stop humans from trying to interact with them, however, and the Martians delight in tormenting them by blocking solid objects with their bodies should their current victim take a swing at them, or simply by just making faces and blowing raspberries at the futile attempts at exacting any kind of vengeance on them.

They make live radio and television impossible. They bring the Cold War to a grinding halt as they revel in telling everyone’s business to everyone else. They even threaten our very survival as a species by spying on couples to the point where everyone is too paranoid to have sexual relations, and they’re just getting started!

Humanity doesn’t know what the Martians’ plans might be, doesn’t know when or indeed if they will ever leave, and the best minds are at a loss on how to make them leave. Is this the fate of humanity, to be badgered into a devolving fury of chaos? Will Luke Devereaux fall from the brink of sanity? Will the Martians destroy apple pie as we know it?

READ! Martians, Go Home, the irreverent invasion farce by Fredric Brown and find out for yourself; and, don’t forget your special decoder ring!