I have a Lego Bot Giant-Robot-Combiner on the way, I only lack a solid plan for which bot is the main torso, which bot will form the legs, the arms, and such. I do know for sure which bot will become the weapon. There’s a new Lego Creator set titled “Drone Explorer” which has just the right sort of parts to form a sword. Building a “robot-mode” for it was easier said than done though because it’s a small set and has the kind of parts that are limiting in terms of body type unless you get creative. So get creative I did.

It’s not too bad as far as robots go, I got the important bits: arms, legs, head, a body. It’s the construction of all those things together where the flimsy workmanship comes out in all its glory. The arms are held on by single round studs, the torso could only be connected in two places so the frame is rickety, and the head is on a 1×1 brick with a blue peg stuck into it that’s just jammed into the body cavity because there was absolutely no other way it was getting on there. 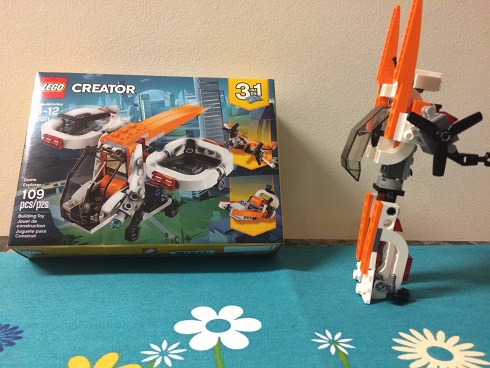 A side-view is a bit better at showing where all the harder to work with pieces are. Getting those feet to work at all took a “Eureka!” moment and there’s really nowhere else to put those big orange parts besides the shoulders; It’s better than clown shoes. The wind screen of the drone went into a nice, neat backpack for iSpy because the back is a mostly hollow “T”. Given what I had to work with I think it turned pretty good. Those feet are definitely better than that sticks it originally had to deal with.

I’ll document the reverse-build so I can remember how to build iSpy again and then get to work on the sword model. Hopefully it’ll be easier as the final combined robot will have a full set of grasping fingers.

The Ramblings Of A Fragile Mind

Blogging about my career development, education, and life.