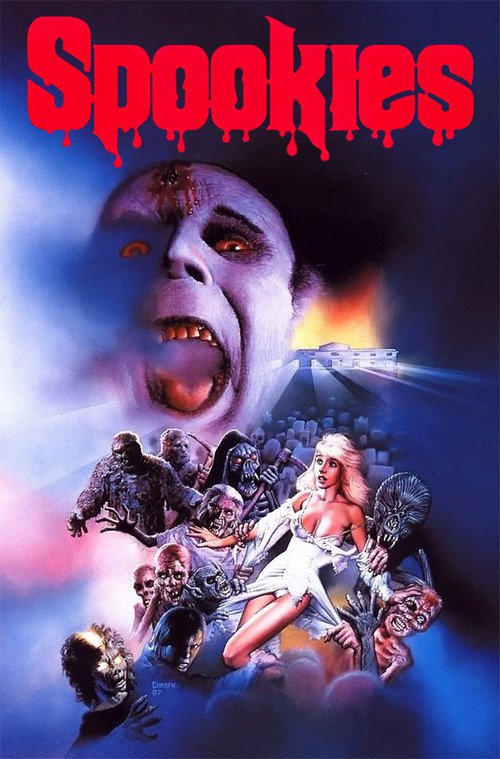 “Welcome, fools.” So I’m the Movigo that got nominated for last Saturday’s pick of what to watch. Could that be a chuckle building into hysterics of evil laughter that I hear? Oh yes, it’s time to get ’em back for the constant turtle jokes (Though you know I love those.) and unearth a film that’s somehow “lost”. Bah, nothing is lost if you have a shovel and the commitment! Not only is this film buried but it’s also constructed out of the corpses of two different films that were left for dead. Grab the jumpers and call me “Frankenstein” because Spookies is getting jolted back to infernal life! Muahahahaha!

The only thing that makes me happier than hosting a movie is hosting a movie that I’ve seen before. I suddenly take on the spirit of some demented ringmaster, raising excitement and expectations with the kind of glee that can only come from watching stupid people die in horror movies.

We open with a young boy who has run away from home because his parents forgot about his birthday. A feral-looking whatsit stalks him through the woods until he comes to an old graveyard and decrepit mansion, wherein he finds what at one point must have been a grand dinner room decorated for a party. Revealing himself to be the inhabitant of a horror movie, the kid comes to the conclusion that his parents remembered his birthday after all. Son, why would your folks choose this dump to throw your party in, where is everybody, and how did they know you would even be here?

A toy robot then noisily enters the room. When he picks up the toy and put it on the table, the same robot enters the room in the exact same way. Then a doll starts moving. If a doll ever starts moving and you aren’t straight-up gone, you asked for it. He’s ignored two warnings, so it’s no surprise then that when he opens the big present on the table, its contents send his sprinting back into the woods with the same weird feral blue guy on his heels. He stumbles into an open grave, into which the feral guy begins furiously shoveling dirt. The boy isn’t even fully covered with dirt when he just dies because “horror film”.

Don’t run away from home kids, there could be grave consequences.

I chose to tell that bit first because it goes a ways into the the other narrative we’re following with a group of adults who are either heading to or looking for a place to throw a Halloween party. I can’t tell which scenes belong to which of the two unfinished films but it’s fairly apparent that there are moments in the script that don’t make sense in the broader narrative. Now there is a reason for people finding this old mansion out in the middle of nowhere. That reason is Kreon, powerful sorcerer and master of the dark arts. It is he who “guides” people to this place while the grunt work falls to his servant who is only credited as “Kreon’s Servant”. Due to his appearance and mannerisms, we dubbed him “Cat Man”, and Cat Man he shall be. Kreon uses the souls of those he draws in to bring life to his beloved, keeping her youthful and animate. The problem with that is she neither loves him nor wants to be revived anymore.

Now if memory serves, which it doesn’t, our protagonists are a group of what are supposed to pass for teenagers as well as an additional group of adults. I don’t know what the relations are beyond couples and singles and even here I couldn’t tell you because none of these people strike one as being friends with the others. The one character I can pin a name to instantly is Rich since he’s a very poor man’s Weird Al and carries around a puppet, making him the instant bane of everyone tuning in. Excellent… 😈

The rest of the characters are terrible at introducing one another but I’ll try my best. There’s Duke who I guess is supposed to represent the whole of New Jersey and his girlfriend , Dave and wife Adrienne who is unforgettable for the amount of complaining she does, Meegan who is memorable only for sounding like “Neegan” and looking like McCoy from “Law & Order” and his wife, and Carol. During the most boring party ever Duke finds a Ouija board and pointer (I don’t know what the thing is called, I think Ouija boards are dumb, okay?) and after threatening them with it a bit, Carol is possessed Evil Dead-style by Kreon. This has the understandable yet amazing effect of everyone immediately running out of and away from the house. Unfortunately, there’s a horde of zombies under Kreon’s control acting as a barrier to prevent any escape, so everyone’s stuck there. It’s fight or die, care to place a wager?

Between Kreon’s throbbing head vein (It’s gross.) and Carol’s new job as Evil Heinous Horror Hag, the party is split further into its individual couples. “Individual couples” is a strange concept. Rich gets trapped with Carol but somehow gets away and spends far too much time being alive and annoying when he should have been dead a long time ago. Duke and his gal get trapped in a cellar and end up battling with farting mummies (Just writing that last sentence brought me so much joy.), Dave and Adrienne are accosted by slug-goblins and later by a bizarre tentacled thing with a giant blue head, and Meegan and his clan are set upon by a giant scythe-wielding skeleton. Rich, meanwhile, will encounter what is hands-down the best effect in the whole film.

The survivors don’t get a free pass though because they’ll eventually have to deal with Carol, the book, and Kreon. Perhaps that bride of his will come in handy, or maybe she’ll end up being more of a headache than she’s worth.

Then, right at the height of my monstrous power, I dropped the ball and forgot to get ratings from the group. There were a few opinions and a generally positive consensus but that doesn’t mean anything without numbers. Ratings require numbers! Unfortunately, not everyone was able to make it and a few had to leave the show early so getting a solid rating would prove tricky, so I’ll go with what I have: Spookies received high approval. The character everyone wanted to die got the best death, the effects and creatures were Original-Evil Dead levels of awesome, and Kreon the sorcerer is the baddest guy around.

Collaborative Average Rating: Guyver is the shit and “Kreon is senpai“. Ppfffrrrtt.

Here’s the trailer if you really need one but personally I think it shows too much of the good stuff that I didn’t cover. If you’re really curious, watch it here as the title is very difficult to find and I only managed to watch it the first time on a Roku channel devoted to B films.

Blogging about my career development, photography, art, and life.