I was surprise-gifted with this Jumbo Grow Shark from Alley Oop! that “Grows 600%”. Things that you put in water to grow aren’t something I’ve ever gone out of my way to get but when the presentation is there, like the growing causes it to “hatch” from an egg or just being something awesome, like a shark, then I can find enjoyment in them. 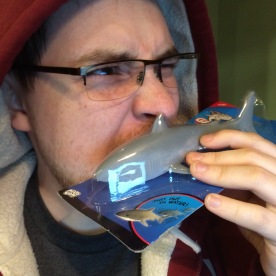 Out of the package the shark smells very strongly of old tires; even with the warning to “not eat” I still wouldn’t want to put this thing in my mouth. After a night of soaking the shark hadn’t visibly grown and was now coated in and had covered the water’s surface and the bowl in a weird, squishy and somewhat bubbly material that can’t possibly be normal or good.

This was going to take a further two-and-a-half days so whether it indeed grows to 600% or melts into goop, I would just have to wait. After two days, “Bruce” was slightly larger but still smelled like tires and was unpleasant to touch. The water was now murky and filled with globs of unknown material. I covered the bowl with foil, now concerned about the cats getting to whatever this growing nightmare was.

It was now three days and Bruce appeared to have grown as much as he was going to. So let’s see how he did on that promise of “600%”.

Ah. Well I have to say that I’m disappointed in you, Bruce. I wasn’t expecting you to get really huge but I thought you’d at least outgrow the width of the bowl. All you did was get really fat and slimy. What is all this goo oozing from your pores anyway? Should I even be handling you? He still smells like old tires, too.

That’s the gamble you take with grow toys. Some of them are great, others earn the title of Lame.

Oh, and this was what ended up happening to the water:

A 30-something gay creative professional.